Comedian Jo Caulfield is offering fans a veritable trio of treats this Fringe season as she's performing not one, not two, but THREE stand-up shows during the month of August.
Amidst all the prep and sojourns to Portobello Beach, Jo took time out to answer our Q&As. 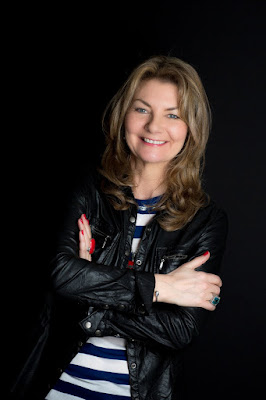 My favourite subject — ME.
I use my shows to get things off my chest. If someone or something annoys me, it goes straight into my show. This year I’ve had far too many run-ins with bad tempered shop assistants, ridiculous service in uber-cool hip hotels, and several embarrassing experiences on holiday. I’ll be talking about relationships and how they change over time, and overhearing my husband giving his nephew advice for how to deal with women.
I also saw my first porn film this year - which was SO ludicrous and unrealistic I’ve written my own *real life* version which I’ll be reading out.
I’m a stand-up comedian. I don’t go for themes. There’s no bells or whistles. It’s just me and a microphone. And to be honest, if there wasn’t an audience I would still be talking!
This is my 15th year.
That might seem excessive but I like the discipline of forcing myself to write a new show every 12 months. Some comedians can run with the same routines for several years (and there’s absolutely nothing wrong with that) but I enjoy the excitement of continually creating something fresh.
Advice for new performers:
Eat a large breakfast. You need the fuel. Chances are you’re going to miss a meal at some point during the day.
Eat fruit. Eat bananas. Full of potassium. They release energy slowly. Apparently Gordon Strachan (Aberdeen,  Man Utd, Leeds, Scotland) would eat one before every game and another at halftime.
Don’t read reviews. The audience response tells you everything you need to know.
Don’t read anyone else’s reviews. Don’t get into the trap of being jealous of someone else’s good review or secretly happy about someone else’s bad review. You are NOT in competition.
Don’t believe anyone’s publicity. If they were really that ‘amazing’, they wouldn’t be playing in a half-empty 20 seat room at 2.15 in the afternoon.
Don’t ask other performers “how their show is going” — you don’t care. And they don’t care how your show is going.
Deals are NEVER made in the Loft Bar at midnight. ‘Networking’ is for bankers and insurance salesmen.
No-one is forcing you to do this. No-one is holding a gun to your head. Relax and remember how incredibly lucky you are to be doing something you actually want to do.

It was bitter sweet experience. It was my first year at the Fringe and I was excited seeing all my posters outside the venue. Until…I was walking by the Pleasance just after midnight and I saw a man looking at my poster. Or, at least I thought that was what he was doing. As I got closer I realised he was drunk and he was urinating on my face.
It’s over too quickly! I live in Edinburgh and September always feels like waking up with a hangover in a ghost town. The crowds are gone. The posters are all ripped and fading. The worst bit is seeing all the venues being dismantled and the trucks being loaded up.
It’s like putting away the Christmas decorations and thinking “There’s a whole 365 days until we can do this again. I want it NOW!”
I hate to think about this because I’m totally unskilled and don’t have any qualifications. I used to work in bars and clubs. And I had a couple of years as a waitress. But I was a real maverick waitress - I took orders from no-one.
Is watching Netflix a possible career choice? I’m good at that.
Rest. Sleep for a couple of hours in the afternoon. Turn up to the venue at least one hour early and sit in the dressing room. I don’t like to talk to anyone or have a drink before the show. I’m just running the lines through my head and trying to get into a good mental frame.
People think comedians are all sitting backstage, swapping jokes and laughing. Not at all. They do the complete opposite. They’re sitting quietly and focusing. There is NO Keith Richards-like behaviour backstage.
This August I’ll definitely be conserving my energy because I’m doing three shows: my Stand-Up show (Killing Time), a satirical political play with Timothy Bentinck, from The Archers (Brexit) and recording another series of Stop The Press for BBC Radio Scotland.
I love Edinburgh so much I moved here six years ago.
Where do I start?? Walking down the Royal Mile at midnight - it’s like walking through a fairytale. The decaying urban beauty of Leith, the bars and restaurants down by The Shore, the mixture of people on Leith Walk, being able to get a bowl of homemade soup in every cafe, the deadpan humour of Scottish people where you’re not sure if they’re complimenting you or insulting you, the posh old ladies of Morningside with their Miss Jean Brodie ‘creme deal creme’ accents, and the vastly underrated Portobello Beach.
When younger comics ask me for advice about the Festival I always tell them: get away from the city centre for a couple of hours, every three or four days. Get a bus out to Portobello. There’s a beach and sand and dogs and normal people - reconnect with how unimportant the Fringe Festival actually is.
Last year I was a guest on Celebrity Mastermind. I picked Edinburgh as my specialist subject. I got every question right. I got every general knowledge question wrong, but I got every question about Edinburgh right!
Did you know the grass mounds on Leith Links were where the cannons were mounted to defend the port…?
Most city’s have a city centre for shopping and suburbs for living in, whereas Edinburgh was designed for people to actually live in the city. I love that. It gives it a modern cosmopolitain edge.
Ate haggis at a Burns Supper in Stirling Castle, before doing the Reply For The Lassies. It was an amazing evening!
The haggis being piped in, the address of the haggis, Tam o’ Shanter being read out… I loved the way all that pomp and ceremony celebrating a great artist, quickly descended into a room full of men drinking whisky and arguing about football.
You never really expect a man in full Highland-dress to say “Ah’m telling you, if Rabbie Burns was alive today he’d be telling Alex Macleish he should drop that lanky bampot McBurnie and play Leigh Griffiths upfront” - but I did hear that at a Burns Supper.
Aberdeen morning rolls. Or as I call them: “heart attacks waiting to happen.” All that salt and fat. They go perfect with butter and bacon and a defibrillator.
There’s a cafe on the Beach Boulevard in Aberdeen called The Inversnecky. It’s a great place to sit outside with a mug of tea, a hot morning roll, and watch the world go by. All the locals are sitting outside. They’re still wearing their coats, but they have their hoods down. I think it’s the Aberdeen version of “going Alfresco”.
As for drink — I can (and do) drink anything. There’s so many great bars in Edinburgh. Especially down the bottom of Leith Walk. Full of old hardened drinkers. Their the kind of places where you can get an organic craft beer but there’s also a frisson of a ‘stabbing’ in the air.
My favourite bar down Leith Walk has a darts board, a pool table and Sky Sports. It’s like a creche for men. They’re all perfectly happy, because they’ve got their toys around them. Last time I was in there with my friend Alison I asked the barman if they had anything for women. He panicked, looked around, and stuttered “Ah, we’ve got crisps…will that do?”
Celebration Of Anger!
Posted by Jo Caulfield at 2:48 pm