Can I Stop You There?

Stop! In the name of laughs…

They say that the compere should never interrupt the acts – award-winning comedians Jo Caulfield and Stu Murphy say ‘screw that’ as they interrupt, and interrogate some of the biggest names on the Fringe, right in the middle of their sets.

Can I Stop You There? is a new kind of comedy show – where anything that catches the imagination of the hosts is immediately up for discussion, debate or debunking. The only thing that Caulfield and Murphy won’t be stopping will be the laughs as they challenge acts to explain themselves mid-set.

Then again, they may just stop them to ask about their shoes, the weather or whether they prefer tonic or cranberry juice with their vodka – the only thing that the acts and audience should expect is that pretty much anything can happen. And probably will.

Can I Stop You There? makes its Fringe premiere for a strictly limited 7 night run at the Gilded Balloon Teviot. 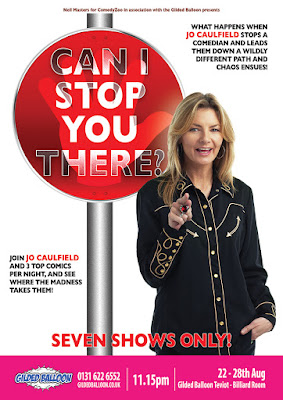