One of Jo Caulfield’s favourite comedic targets is her husband; a fairly safe target. When she expands the target to include his friends, we all laugh along; maybe her husband and his friends really are that dim. However, by the end of the show, the target has expanded to all men – meaning she was making fun of around half the crowd, this reviewer included. From the uproarious laughter it’s obvious that no one has taken offence. By starting with a safe target and expanding slowly, we’ve been lured into a trap. Crafty Jo Caulfield is insulting us to our faces and we’re giggling like idiots! Fair play to her.
Caulfield’s show Thinking Bad Thoughts is a hilarious hour of observational stand-up comedy, where she investigates whether her thoughts are “bad thoughts” – primarily by gauging audience reaction. Having recently moved from London to Edinburgh, Caulfield is having to adjust to Scottish friendliness and gigs in small towns, and the joy of the show is hearing her cynical and bitter reactions to familiar situations. Thinking Bad Thoughts is terrific show and Caulfield is effortlessly engaging and hilarious throughout. - FRESH AIR - 5 STARS (Aug 2012)

Jo Caulfield is a bit of a household name these days. After three series of the rather marvelous It’s That Jo Caulfield Again on Radio 4, she conquered the TV stand-up holy trinity, of Have I Got News For You, Michael McIntyre’s Comedy Road Show and Mock the Week. Experience shows. In essence Caulfield is extremely good at her job.
Fortunately, success hasn’t tempered her material, which is as snappy and as caustic as ever. The show contains a veritable pick-n-mix of everyday things that annoy her. It’s all intelligent good stuff, from porn, to adverts aimed at women, to that most ubiquitous group of people – men – Caulfield delivers verbal punch after punch. Jo Caulfield settles the argument, once and for all. Women are funny. Get over it. - SGFRINGE - 4 STARS (Aug 2012)

Years of experience on the stand up circuit, as well as on television shows such as Mock the Week, Have I Got News For You and Michael McIntyre’s Comedy Road Show, have imbued Caulfield with a languid confidence and superb knowledge of how to structure a set in order to make it engaging and appealing to a wide audience.
Her routines display brilliant balance in all respects: pithy one liners were interwoven with longer anecdotes, monologues with audience participation and topical jokes with ones based on her personal life. Deliciously witty and razor sharp. - BROADWAY BABY - 4 STARS (Aug 2012)

“Thinking Bad Thoughts” is a thoroughly enjoyable, slightly twisted take on modern life. Though punctuated with sarcastic, bitter barbs, Jo Caulfield always retains enough warmth to draw her audience into her cosy, baleful world. Her vitriolic rants are delivered in a sharp, sardonic manner, the niceties of decent society given a short shrift here.
Caulfield has a strain of jet black comedy running through her material, deploying it strategically and eliciting loud guffaws from an appreciative crowd. It is a potent weapon, elevating parts of her routine into golden territory. You will never watch Newsnight in the same way again. Political considerations are also lurking, American policy skewered through the lens of poor customer service as the comedian pens her complaint. - GIGGLE BEETS - 4 STARS (Aug 2012)

“Thinking Bad Thoughts” sees Jo Caulfield’s trademark sardonic edge and disillusion burn fiercely; hidden among the good-natured grumbles are moments of brilliantly arresting black humour ...
With the crowd on-side, Caulfield embarks on a tremendously consistent hour of comedy.
Most striking was her impressively even-handed dealings with gender humour, which avoided many of the imbalances that afflict other comics; she has the entire audience with her throughout, in stitches.
Jo Caulfield brings laughter and perspective to many sobering questions. The seeming effortlessness of the show as a whole, though, is the best measure of her comedic quality. - FESTIVAL JOURNAL - 4 STARS (Aug 2012)

Fresh Air ***** "a terrific show and Caulfield is effortlessly engaging and hilarious throughout"
The Scotsman **** "Her observations have the audience whopping with laughter"
ScotsGay **** "Caulfield delivers verbal punch after punch"
Festival Journal **** "She has the entire audience with her throughout, in stitches"
Gigglebeats **** "A thoroughly enjoyable, slightly twisted take on modern life"
ThreeWeeks **** "She had most of the audience in stitches all the way through"
One4Review **** "A class act and one that should certainly be checked out"
Broadway Baby **** "A deliciously witty and razor sharp routine" 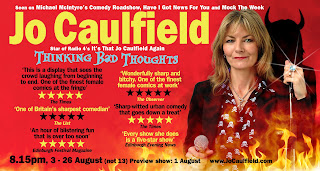