They wanted my take on living in Edinburgh:

I've just got back home to Edinburgh from a week of shows in London and I have to say, "Wow! What a train journey".

The scenery from Newcastle to Edinburgh is breathtaking. All along the coast, the craggy cliffs, the crashing waves, simply breathtaking. I actually came out of the toilet and stood in the carriageway for a better view. I thought, "I don't care if the ticket inspector catches me, this is definitely worth paying for".

See what I did there? I used Dundee as a punchline. I did that because I've been told by several Scottish comedians that Dundee is the perfect victim for jokes about Scotland. Obviously those comedians have never been to Peterhead.

See what I did there? I used Peterhead as a punchline.

Mind you, the crowds during August can get a bit tiresome. Last night I got stuck behind several hundred pensioners coming out of the Tattoo, heading for their tour coaches - it was like watching one very long episode of Walking With Dinosaurs.

So we're into the final days of the festival. Personally I'm looking forward to getting my front room back. I've had a rotation of family members, friends and comedians sleeping on my couch. My front room has been like Piccadilly Circus. Which is like Hunter Square - but with lower cholesterol.

But there are some things I don't like about the festival.

I don't like the "Edinburgh Festival Look-Around" - this is when you're speaking to somebody and you know they're not listening because they won't look you straight in the eye as they're far too busy looking over your shoulder to try and find someone more interesting to talk to. Oh well, I suppose it was my fault for marrying him.

And I think it's a shame the way the festival has become so commercially driven. It's all about marketing. And promotion. And raising your profile. That's why there are posters and leaflets everywhere. But the leaflets do work. At the end of this month the faces of all the comedians will be extremely well known . . . to every road sweeper in the city.

And don't get me started on the manipulation of the press. Too many performers have too many quotes stuck on their posters taken completely out of context. For example, if I were to say "Jo Caulfield is one of Britain's best comedians and every show she does is a five-star show" that would just be my opinion. But now my opinion has been published in the Evening News "my" opinion becomes an Evening News "fact". You see? That's how the press is continually manipulated.

And I don't like that, although I WILL be using that very same Evening News quote on my posters next year.

I haven't been to the Book Festival yet, but it is on my list of things to do. I've heard it described as "a lot of people drinking alcohol while surrounded by books”, which makes it sound less like an internationally acclaimed literary event and more like a visit to the Macdonald Road library.

Of course, some of the UK's finest writers live here in Edinburgh: JK Rowling, Ian Rankin, Alexander McCall Smith, me. I don't like to boast but have JK, Ian or Alexander been asked to write a column? No, no and no. I think that speaks volumes about who the Evening News considers to be "the best writer" in this town.

By the way, both John Hannah and Ken Stott have approached me with substantial offers to buy the rights to this article. ITV is also quite interested although it wants to relocated the entire story to a London newspaper office, gloss over all of my unique character foibles and put Russell Brand in the lead role.

You're pulling my legend

This Sunday saw the first Hearts v Hibs Premier League game of the season. According to the Hearts website, hospitality in the Gorgie Suite was available at £165 plus vat and it added: "You'll be able to meet past and present players including the Legend that is Wayne Foster!"

I looked up the word "legend" on Wikipedia.

It said: "A legend is a narrative of human actions that are perceived both by teller and listeners to take place within human history and to possess certain qualities that give the tale verisimilitude."

I looked up Wayne Foster on Wikipedia. He wasn't listed.

To be honest, I don't know much about Scottish football, but I do know that in today's precarious financial situation £165 plus vat seems like an awful waste of money - that could have been put towards a Christian Louboutin sequined evening bag.

PS. I was just joking about Wayne Foster. He IS listed on Wikipedia. He's described as a large, bipedal humanoid, also known as a 'Sasquatch'. Oh no, sorry, I looked up Colin Calderwood by mistake.

Posted by Jo Caulfield at 6:11 pm No comments: 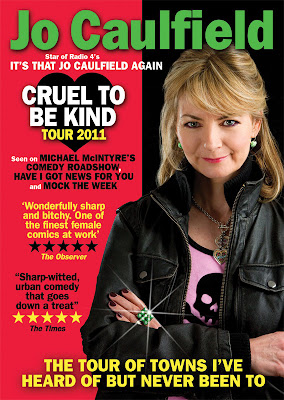 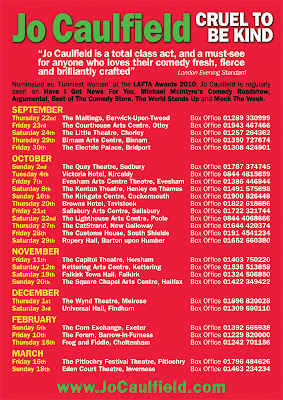 Posted by Jo Caulfield at 4:31 pm No comments:

They wanted my take on living in Edinburgh but not performing at the Festival:

Here’s something you would have never guessed about me - I’m a Virgin! Yes this is my first year at the Edinburgh Fringe Festival. I’ve been here 10-years-in-a-row as a performer but this is my first time as a punter ... And I’m loving it!

The excitement and vibrancy of the Fringe has a magic hold over Edinburgh. Well, most of Edinburgh...

I went over to Morningside on Tuesday to meet a friend for lunch at Loopy Lorna’s (there’s a sentence I never thought I’d be typing!) It was a very enjoyable lunch, and I’m glad to report since she’s been on the antidepressants Lorna is a lot less loopy. But leaving Lorna’s mental health problems aside, I couldn’t believe Morningside! Not one single Fringe poster on display, no one handing out flyers - its as if the Festival doesn’t exist.

They really are a different breed down there, aren’t they? Its like a gentrified version of The Land That Time Forgot.

Back in town the Festival is in full swing. The Assembly at George Square is packed, the Pleasance Courtyard is overflowing and Greggs the Baker on Rose Street has queues halfway round the block. Mind you, its like that every day of the year. You really do have a bad diet here in Scotland.

Going passed the EICC I overheard two French girls coming out of Ed Byrne’s show. They were obviously trying to decide which show to go and see next. The first girl pointed at Vladimir McTavish’s poster. “Oh no”, said her companion, “If you did not understand zee Irishman you will NEVER understand zee Scottish man”.

But while all the performers are vying for one the prestigious Edinburgh Fringe Awards (No, I’ve no idea what they’re called either) I’d like to give out my own award to Lothian Buses.

Please take a minute to go and look at their website. They give FULL instructions on how to use a bus, there’s even a short video. A short video of HOW to travel on a bus! Its aimed at tourists & foreign visitors - people who arrived here by train, plane and car. Much harder modes of transport.

Whoever decided they needed that webpage of instructions and the video deserves the “I’ve Invented Something That Wasn’t Needed To Make Me Look Busy And Keep My Job” award.

I think me favorite part is “Step 7: Take your ticket, find a seat and enjoy your journey”.

Before you write in an complain, that was a joke, he was joking.

I’ve always loved that deadpan downbeat sense of humour the Scots have. I was fighting my way through the crowds on the Royal Mile with my friend Paul. He’s a big football fan. I said to him, “You must be happy about Hearts being drawn against Spurs in the Europa League play-off?” He looked me straight in the eye and with all the bedlam going on around us, all the buskers, and drama students, and stilt-walkers and chainsaw jugglers, he said, totally deadpan, “Oh aye. It’ll bring some much needed excitement to the city.”

By the way, in London my two nearest football teams were Chelsea and Fulham, two clubs owned by crazy megalomaniacal millionaires who sacked managers at the drop of a hat - so its great to be in a city with two more sensibly run clubs.

Anyway back to the Festival. John Malkovich is in town. As is Maraget Cho, Ruby Wax, and Dave Gorman - I know because I’m playing the ‘Let’s Spot A Celebrity Who Didn’t Pack The Right Clothes And Is Now Getting Soaked In The Rain’ game.

As the days go on I’m actually becoming very defensive about the weather. I’m fed up of comedians asking “Does it always rain? When will the rain stop?”

I tell them the famous Scottish saying my Aberdonian mother-in-law taught me when I first arrive here: “If you don’t like the weather in Scotland, wait 5 minutes ... and if you still don’t like it g’way hame tae London ye big whinging crybaby Sassenach strumpet”.

I’ve no idea what that means but the whole family laughed when she said it so I’m sure it must be delightfully amusing.

Should you want to take a breather from all the wonderful comedy and theatre and dance why not indulge in a bit of people watching? I’d recommend Hunter Square.

Tourists, students, buskers, pickpockets, plain-clothed policemen. It’s like a live version of Crimewatch UK. Why not kick back for a couple of hours: watch the professional fire-eaters, engage a visiting Australian tourist in a discussion about world politics AND delicately sip from a can of Special Brew lager?

And I have a question: does Edinburgh have its own anthem? Does Auld Reekie have an equivalent to “I Belong To Glasgow”, or “The Northern Lights Of Old Aberdeen”, or “Ferry Cross The Mersey”?

If it doesn’t I’d like to propose Funky Town by Lipps Inc. Yes, its an old disco song. Yes, its loved by gay men everywhere. But more importantly its an automatic shot-in-the-arm feel good factor ... and that, my Edinburgerer* neighbours, is what makes it so perfect.

All-in-all I’ve been very happy to lose my virginity with you. You’ll phone me in the morning won’t you?

*You do call yourselves Edinburgerer’s, don’t you?

BTW I took a year off from the Edinburgh Fringe Festival but I WILL be back in 2012 with a BRAND NEW SHOW!!

Posted by Jo Caulfield at 3:15 pm No comments:

More dates to be added.

Posted by Jo Caulfield at 9:04 pm No comments: