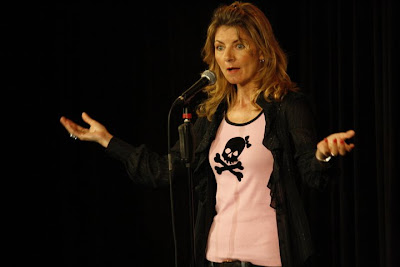 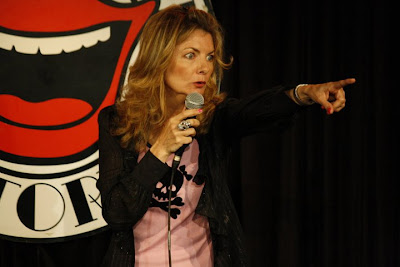 No idea what I'm pointing at... 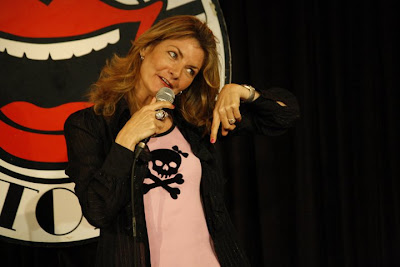 ...or what I'm talking about.
Lovely club. Friendly people. A wonderful week.
Posted by Jo Caulfield at 6:45 pm No comments:

They genuinely make me laugh. They're like the ultimate hecklers.

I sent out this tweet "Leave your reasons here for NOT going to see Jo Caulfield tonight at the Journal Tyne Theatre, Newcastle"... within a couple of hours I got the following replies:

@Splottdad: My ex is from Wallsend, and they still have a contract out on me . . .

@BaldyMemike: UN resolution only mentions Libya. Doesn't give me the right to take unilateral action to come to your show.

@mike_fordham: I'm unable to leave the house as I've been electronically tagged until June.

@simongoldsays: I've blocked out tonight to write a letter to my favourite detergent company to tell them how much I like their product.

@kardinal69 : sorry cannot go to see your show, it's the child’s bath night, I'm staying in and washing my heir.

@bambaoap: I hear you're funny and I don't like to laugh!

@jabber_taff: there's going to be a frost tonight and my cap sleeve t shirt is in the wash.

@MerseyMal: I have an intimacy phobia so I need to pay £50 for a seat half-a-mile away from the stage.

@Splottdad: I'm waiting for the boat to come in with Jack Ford (you need to be old to get that one!)

@laurastevie: I have to stand at a photocopier till 10pm tonight.

@lizzieg999: Afraid my pacemaker would interfere with your sound system.

@Olaindeach: If I start swimming, it'd take me till tomorrow evening to reach the Tyneside shore. More likely I'd drown in North Sea.

@DaiGoch: I was going, but I realised that I'd confused you for Lucy Porter (ducks).

@sandy_db: because Sunday is my "do everything naked day" so am worried about taking the audiences attention from your performance?!

@mr_g_marsh: would come but possessed by ghost of Michael Jackson & have to get down with the kids and dispense Jesus Juice. *Grabs crotch*

@DJBigAndy: I live in Romford, Essex; have a heart condition, a 3 year old and sod all money, that's why I won't be going!

@fortuneightuk: I have imposed a no fly zone over my house and its my turn with water pistol.

@krystalsayers: I have no money...

@JulianMHall: I'm not coming to your gig because the voices told me to stay home and clean the guns.. but if you REALLY want me to *g*

@Dysfunkunk: I’ve got a session booked in with a Razzle I found in a bush on the way home from Primark.

@snafu_john: I'm not coming to your show so I can't collect my 'fantastic prize'... not if it's just another effing speedboat.

@charlotesayers: I won't be going because I’ll be reading your RT tweet's about reasons about not going... (:

@dvo10: I'm not leaving the house until I know for certain I won't hear Chris Moyles somewhere.

@jojohedgehog: Little chef are doing full English breakfasts this evening, a not to be missed event I'm afraid.

@KymriskaDraken: I can't attend as I am stuck in Sweden, and Midsomer Murders is on tonight.

@WillPurry: I couldn't have come to your gig because I was giving the police surgeon my best 7 times tables.

@jaymzf: I wouldn't enter a mundane Twitter competition to win a prize...

@mrenaut: I laughed at something a woman said as recently as last week, it just seems a bit too soon to risk doing it again.

@rnmlowe: Sorry miss but I'm not but I will be wearing sack cloth and walking on hit coals as a punishment.

@Liam_Cumbers: My dog ate all my money so i won't be able to make it .

@Bond007Girl: #reasonnottigotoseejo I live 4 hours drive away, have housework to do & no ticket.

@DaiGoch: I've a note from my mum excusing me, I've got period pains (yes one lad really did try that in school).

I picked @UK_Muso: as the winner with "Dear Jo. Paul can't come to your gig becauase he's not feeling well - Regards, Paul's Mum." He won a CD. Which I promise I will post today!

Special mentions also go to these 4 for sending questions that made me laugh:

@markandthezebra: When you are on the panel on HIGNFY, is it because someone hasn't turned up??

@Jas: When will I be able to pirate your material on DVD?

@Olaindeach: I am not a pleasant person, if I go down somebody else has to go down as well, any ideas?

@Havocman: What's your favourite part of a horse?

* I really hate that term 'people who follow me' and people being called 'Followers' - I am not that deluded.

I wish there was another term we could use... how about 'Cult Members'?